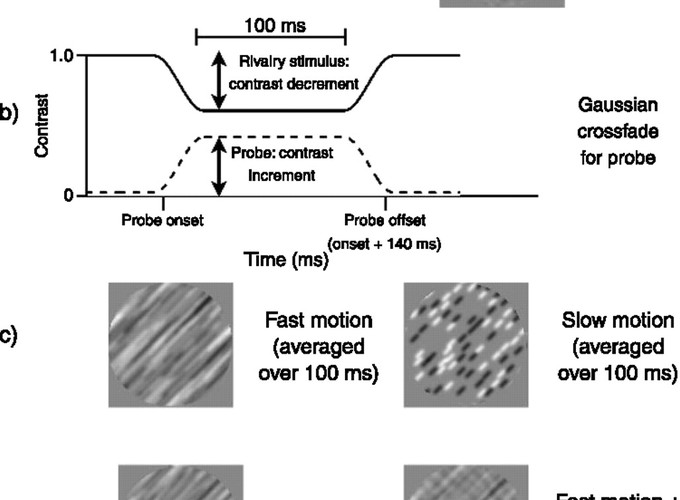 We studied binocular rivalry between orthogonally translating arrays of random Gaussian blobs and measured the strength of rivalry suppression for static oriented probes. Suppression depth was quantified by expressing monocular probe thresholds during dominance relative to thresholds during suppression. Rivalry between two fast motions or two slow motions was compared in order to test the suggestion that fast-moving objects leave oriented “motion streaks” due to temporal integration (W. S. Geisler, 1999). If fast motions do produce motion streaks, then fast motion rivalry might also entail rivalry between the orthogonal streak orientations. We tested this using a static oriented probe that was aligned either parallel to the motion trajectory (hence collinear with the “streaks”) or was orthogonal to the trajectory, predicting that rivalry suppression would be greater for parallel probes, and only for rivalry between fast motions. Results confirmed that suppression depth did depend on probe orientation for fast motion but not for slow motion. Further experiments showed that threshold elevations for the oriented probe during suppression exhibited clear orientation tuning. However, orientation-tuned elevations were also present during dominance, suggesting within-channel masking as the basis of the extra-deep suppression. In sum, the presence of orientation-dependent suppression in fast motion rivalry is consistent with the “motion streaks” hypothesis.